I have a MacBook Pro now, courtesy of my new employer, but it only has four USB-C ports and nothing else, so none of my existing hardware could connect to it.

I bought a Microsoft Bluetooth mouse, a no-name USB-C to HDMI cable to connect my HP monitor, and a Logitech wireless keyboard labeled “K750 keyboard for Mac”. The irony is that Microsoft mouse gave me the least amount of trouble, and the keyboard “for Mac” gave me the most. 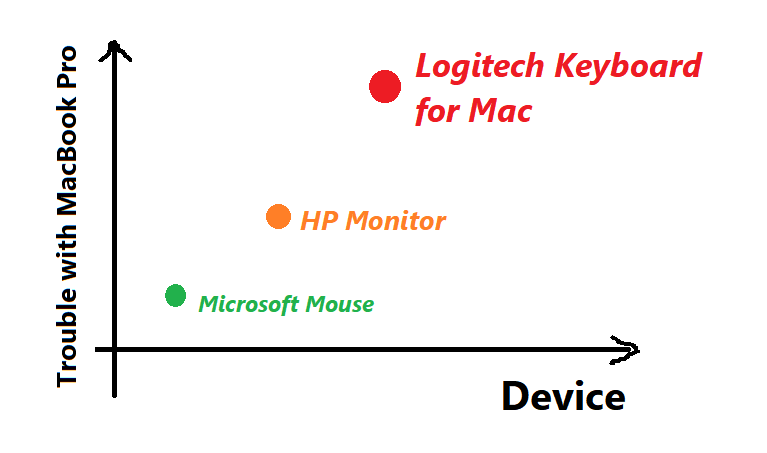 I paired the mouse with the laptop using the System Preferences dialog, and it was good to go in no time.

The monitor was moderately annoying: it worked out of the box, but the edges of the picture were cut off (top, bottom, left, right) were off screen. I could not see the title bar, and I could only see the top of the system tray. The problem was not the cable, nor the MacBook: it was the monitor that decided to turn “Overscan” option on (hidden under “Image Control → Custom Scaling” menu). It took a while to realize that no amount of fiddling with the “display” settings on the Mac will save me, so out of desperation I started playing with the monitor controls, and finally found the solution.

Logitech keyboard “for Mac” was the worst. It is a “wireless” keyword, not Bluetooth, so it has a little dongle, a.k.a. “Unified receiver” that goes into a USB port. I spent about an hour trying to find it. Apparently, it was taped to the inside of the box in which the keyboard came, but not very securely, so it flew away and fell to the floor when I opened the box. The dongle is really tiny, so it did not make any sound, and was not easy to find. I even submitted a ticket with Logitech support complaining that the dongle was not included with the keyboard, I am still waiting for the response 🙂

Once I have found the dongle on the floor, I discovered that it is USB-A, not USB-C, so it is not compatible with my Mac. I had to find an adapter: it costs $10, but the nearest one available for immediate pick up is about 30 minutes away, and if I want shipping it takes a week or more (because of the virus and stuff). So, the keyboard is still collecting dust on my desk, hopefully I will pick the adapter tomorrow and will be able to check if it works.